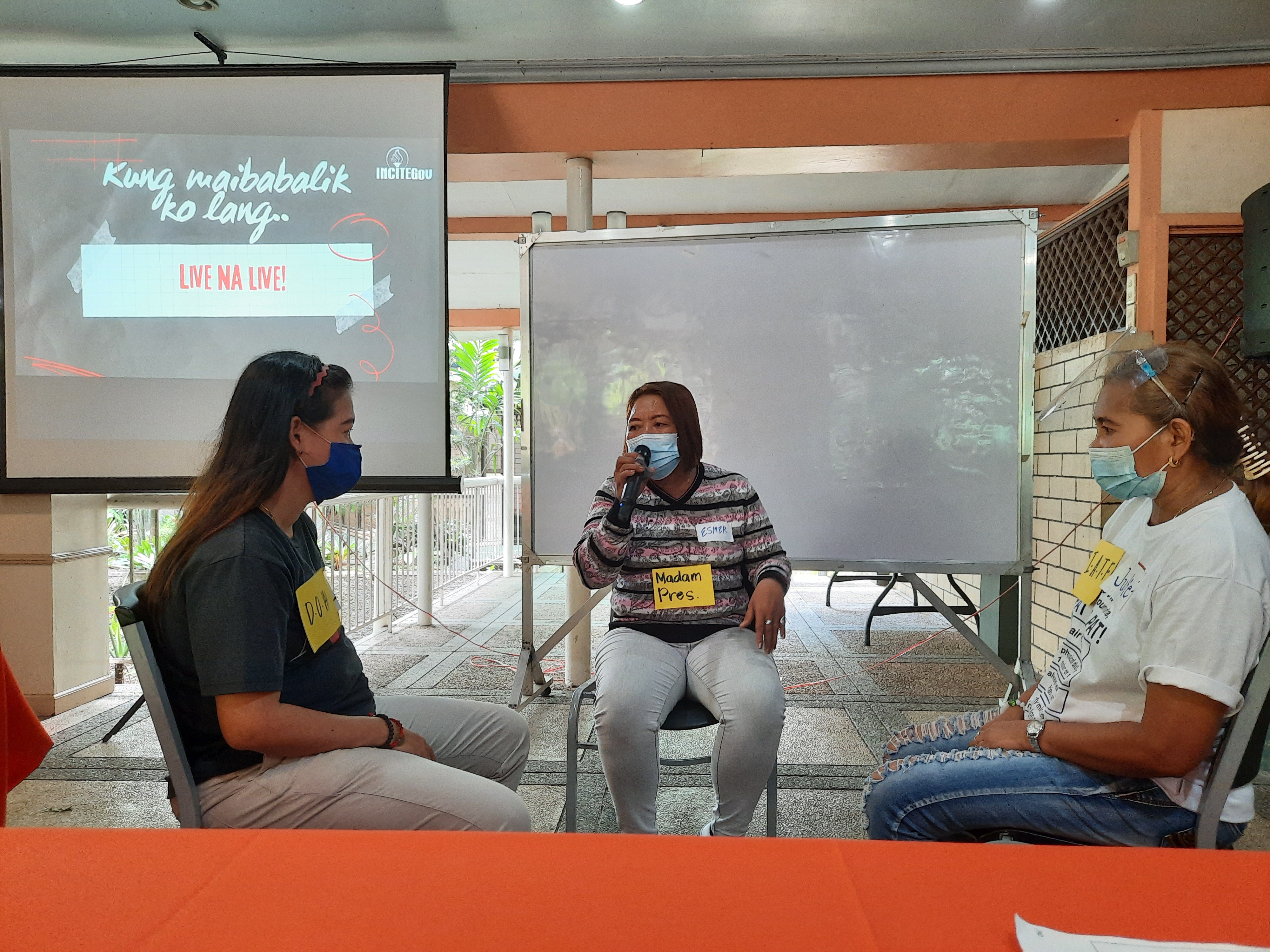 'How are we imparting democratic principles?' INCITEGov launches the P-G-D Modules INCITEGov rolls out P-G-D modules to urban poor leaders

The 2022 national election is an auspicious time to engage the broad sections of Philippine society in an active dialogue about democracy.

Can this be done when people are burdened with the daily struggle of surviving this pandemic? Can this happen amid the tight constraints on mobility that limit social interaction? Can this propel the people to be politically involved given the threat and intimidation experienced by those who oppose the current administration?

Under these extraordinary circumstances, INCITEGov proceeded to develop and pilot-test modules for facilitating conversations on democracy. These modules aim to revive the spirit of dialogue and free exchange of ideas among wide and diverse groups of people. Its objective is to enable more and more Filipinos to see the value of the 2022 national elections as a crucial political moment that will determine the shape of Philippine democracy in many years to come.

The P-G-D Modules — short for “Politics-Governance-Development,” the guiding framework of INCITEGov — were designed to allow the participants to actively construct their own understanding of the Philippine society. It provides a guide for connecting the importance of good governance and development, and the crucial link of politics to both. The modules were crafted to help break down the barriers of miscommunication and build a process toward collaborative action.

The P-G-D Modules drew lessons from INCITEGov’s recent studies, focus group discussions (FGDs), roundtable discussions, and reflection sessions on populism in the Philippines. One such crucial lesson is that democracy is a complex concept for many Filipinos. Its relevance to their day-to-day lives must be portrayed in concrete terms. Another important lesson is that lectures on politics and governance don’t work. On these topics, Filipinos generally want to be listened to and understood first.

INCITEGov drew inspiration from its series of dialogues with civil society that used generative conversation as a method of discourse. Generative conversations are defined as “conversations that generate shared meaning and lead to action.” It is further described as involving an “authentic exchange of sharing and inquiry, leading to the emergence of new knowledge and understanding that could not have been created individually.”

Module development started in November last year under the leadership of trustees Veronica Fenix Villavicencio and Philip Arnold Tuaño. Both took time to review the various proceedings, studies and documentation reports produced in INCITEGov’s activities related to the examination of populism in the country. They also reviewed the original documents on P-G-D written by the late Mario Taguiwalo in the early years of INCITEGov. Based on these, they outlined the key points that the P-G-D modules must be able to articulate and update.

INCITEGov proceeded to get the services of Benjamin Roberto Barretto, a part-time professor of politics and governance at the Ateneo de Manila University, to elaborate on the key concepts on P-G-D. He developed five modules containing the following: Power, Politics, and the Social Contract; Institutions; the State; Democracy; Good Governance; and Citizenship, Nation-Building, and Development. These modules were finalized in January 2021.

Introduction of the initial five modules containing key concepts on P-G-D to youth leaders from Youth for Humanity and Social Change.

On April 24 and 25, the modules were piloted with 10 youth leaders from Youth for Humanity and Social Change. The participants expressed readiness to be engaged in the rollout sessions on P-G-D in the future.

Under the guidance of Corazon Juliano-Soliman, INCITEGov founding trustee and current project coordinator for the organization’s project with the National Endowment for Democracy, the modules were further enhanced into a simpler version in Filipino language. The INCITEGov staff consisting of Marj Ibanez, Ma. Nicole Pangilinan, Shei Datinguinoo, and Verlie Retulin proceeded to design more structured learning experience (SLE) sessions through research, mock sessions, and FGDs.

In June, the basic sector version of the P-G-D modules were ready. These consisted of the following sessions: “Nagmahal, Nasaktan, Nag-Move On (Of love and heartaches)”: Qualities of a Democratic Leader; “Ano ang Ibig Sabihin ng Maunlad at Masaganang Buhay?”: Our Vision of Development; “Kukumbinsihin Kita”: Democratic Institutions and the Vast Powers of Government; and “Sana Naman Taumbayan:” The Importance of Political Participation. 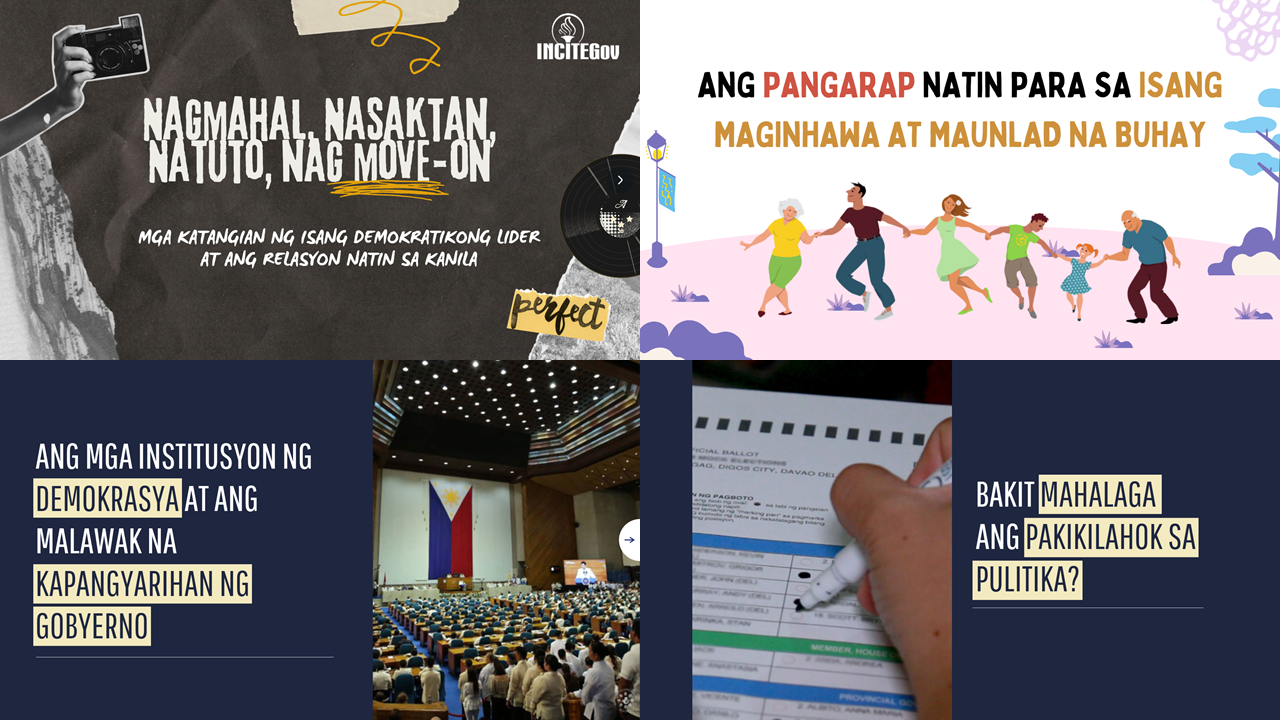 The four modules used during INCITEGov’s P-G-D sessions with the basic sectors.

Each session developed several key points on their respective topics using straightforward language and methods, starting with SLEs and followed by group processing and discussion. The SLEs have been designed as fun and engaging activities that can be executed both on face-to-face and online platforms.

The current version of the four P-G-D modules can be executed in four hours, one hour per module. A fifth session may be added to identify possible collaborative actions where there is readiness among the participants.

The implementation time was significantly reduced from the original version due to the serious challenges posed by prolonged sessions on online platforms. Furthermore, present government regulations on public gatherings only allow limited time for participants to conduct face-to-face sessions.

Introducing the P-G-D modules to the priority sectors

The P-G-D modules were pilot-tested with 35 SNPP leaders on June 5 and 6. The two-day, face-to-face activity was held at the University Hotel, University of the Philippines Diliman, where the participants were swab-tested and given strict instructions to observe social distancing. 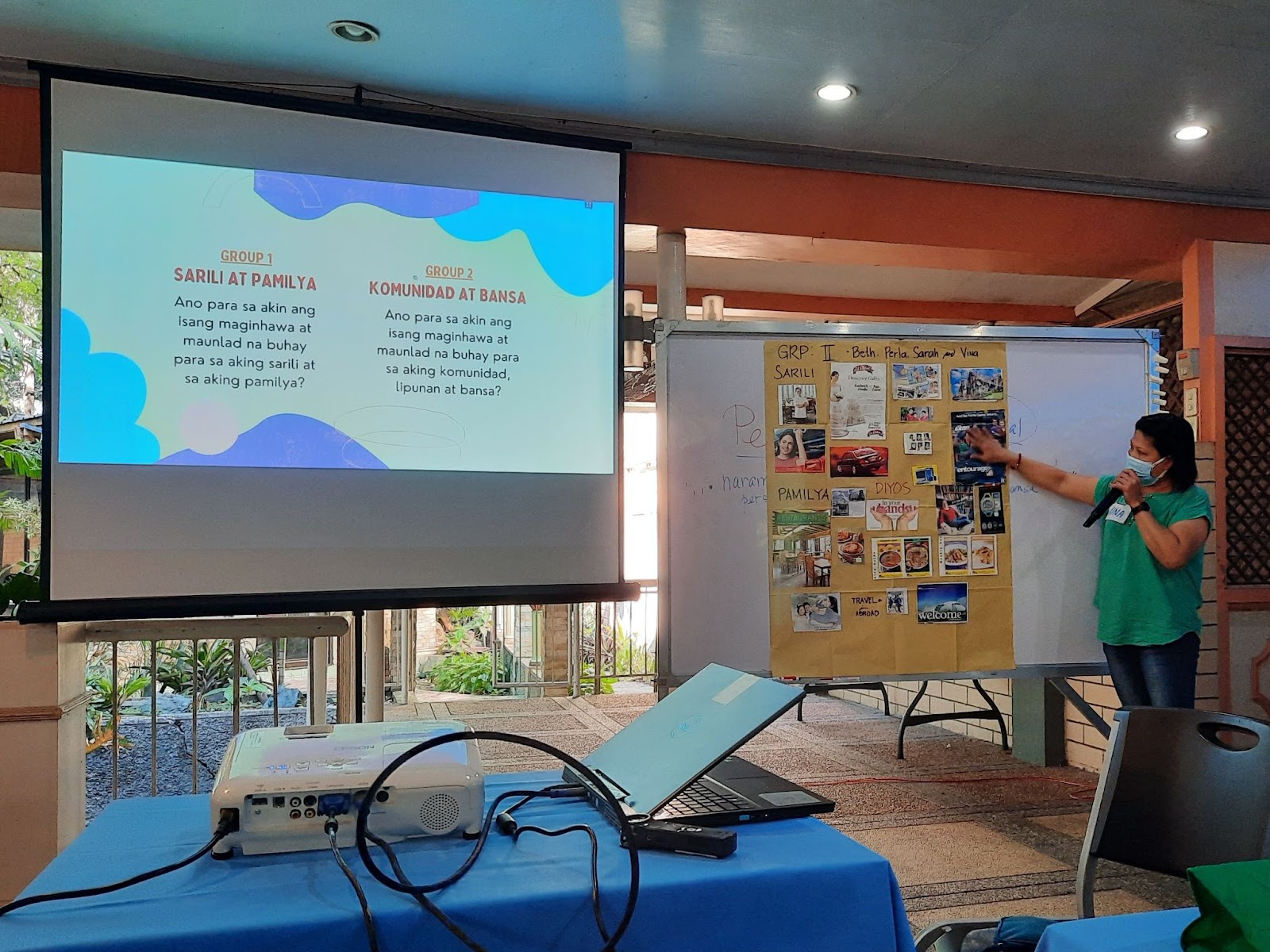 An SNPP member presents their group’s aspirations for their family and themselves as part of the second P-G-D session, “Ano ang Ibig Sabihin ng Maunlad at Masaganang Buhay?”: Our Vision of Development,” on June 5.

While the modules received a warm reception from the urban poor leaders, the pilot test showed major areas needing improvements, particularly on the SLE design and execution. Some concepts also needed further sharpening and simplification.

The P-G-D modules were revised and subjected to another face-to-face pilot test with 22 leaders of the Alyansa ng Samahang Pantao (ASAP) on June 29. ASAP is a member of Tindig Pilipinas consisting of various urban poor groups in the country. They gave positive feedback on the sessions and proceeded to plan for their rollout and implementation in their respective areas. 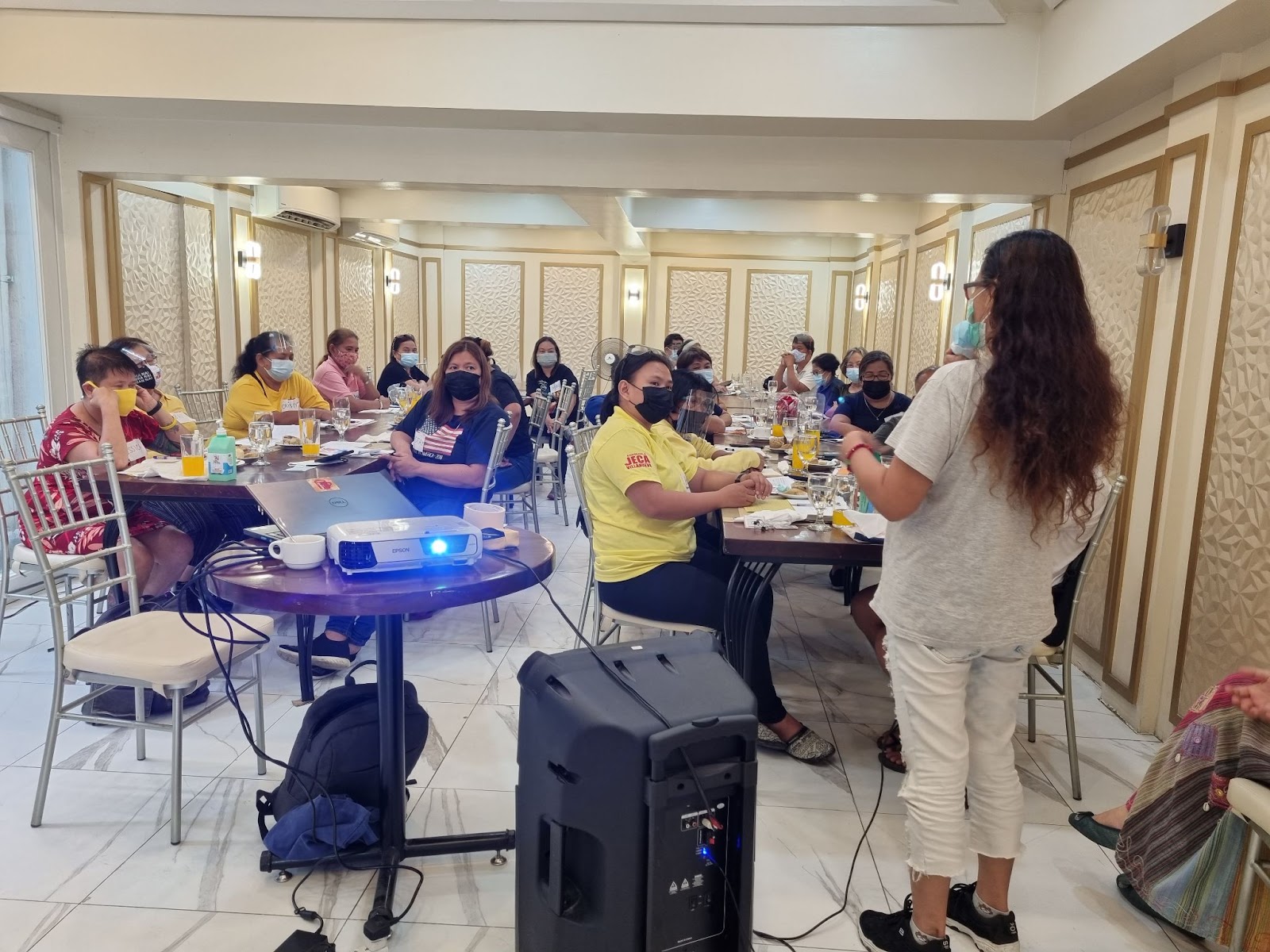 The urban poor groups, led by Alicia Murphy and assisted by Rowena Amon of the Community Organizers Multiversity (COM) and Princess Asuncion-Esponilla of the Urban Poor Associates (UPA), conducted Stage 1 of the P-G-D modules in July and August, involving 175 urban leaders and members in the areas of Estero, Slip Zero, Kabalikat and Sama-Sama in Manila, and in urban poor communities in Taguig and Pasig. These were face-to-face sessions that sought clearances from local officials in compliance with quarantine rules. Stage 1 consisted of the session on Democratic Leadership. This will be followed by Stage 2 on Democratic Governance which is scheduled to be completed by the end of this year, and Stage 3 on Democratic Politics beginning January next year.

On August 28, INCITEGov presented the overview of P-G-D modules to the core group of young professionals led by Jobelle Alzate. In this online session, they asked INCITEGov to lead and facilitate the P-G-D modules which they have scheduled to undertake with 20 young professionals from government, private sector, and NGOs. They expect these young leaders to generate circles of conversations on democracy after completing the modules. 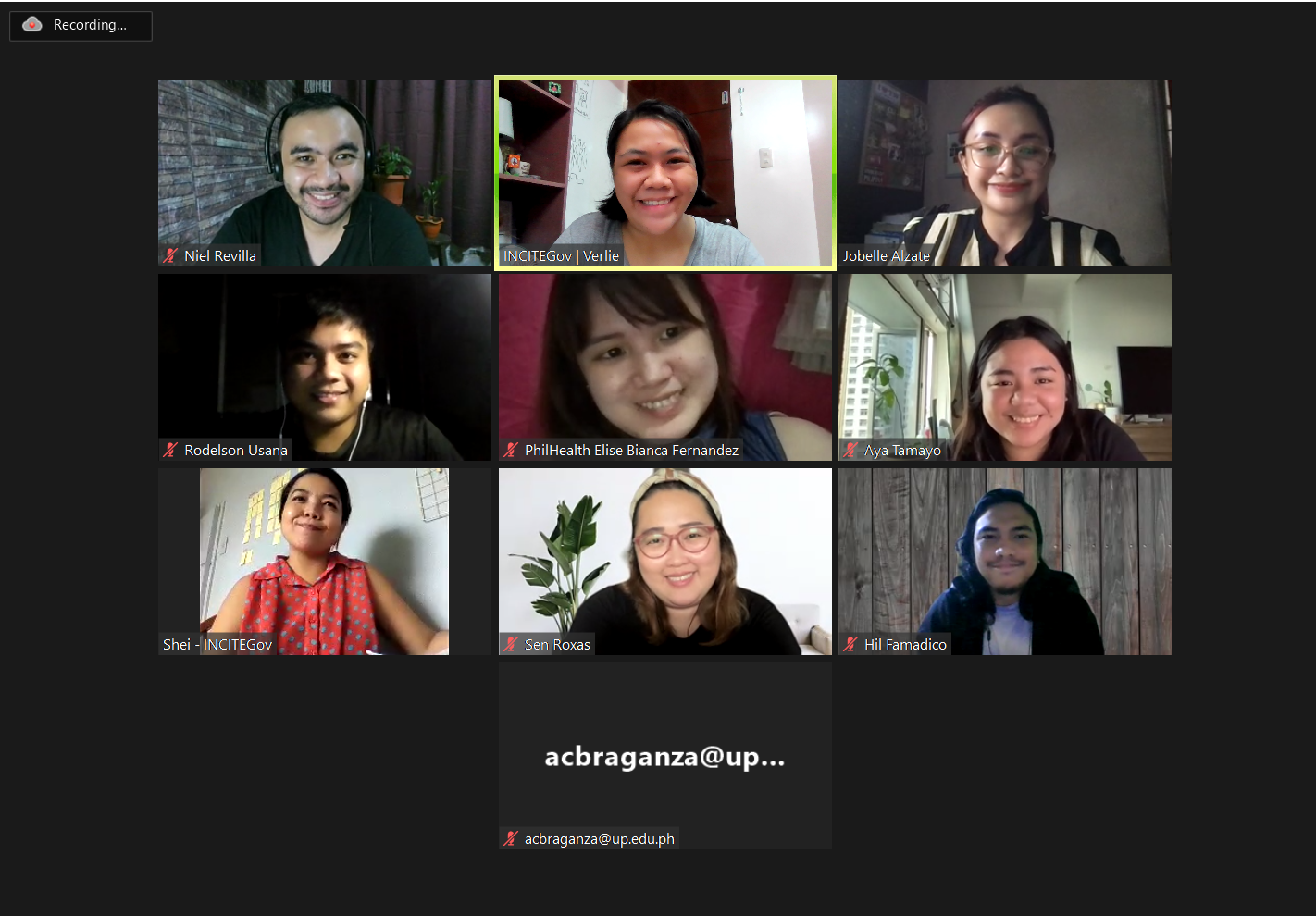 Introduction of the P-G-D modules with the core group of the Young Professionals sector on Aug. 29.

The women sector, led by Teresita Quintos Deles and assisted by key leaders of the Akbayan Party List, sector-fitted the P-G-D Modules to include sessions on Feminist Politics. Dubbed as “Puso’t Politika (Heart and Politics),” the enhanced P-G-D Modules 1 and 2 (on Democratic Leadership and Vision of Society) were conducted on September 4 and 11, respectively. Twenty-five of Akbayan’s trainers from various locations nationwide attended the online sessions. 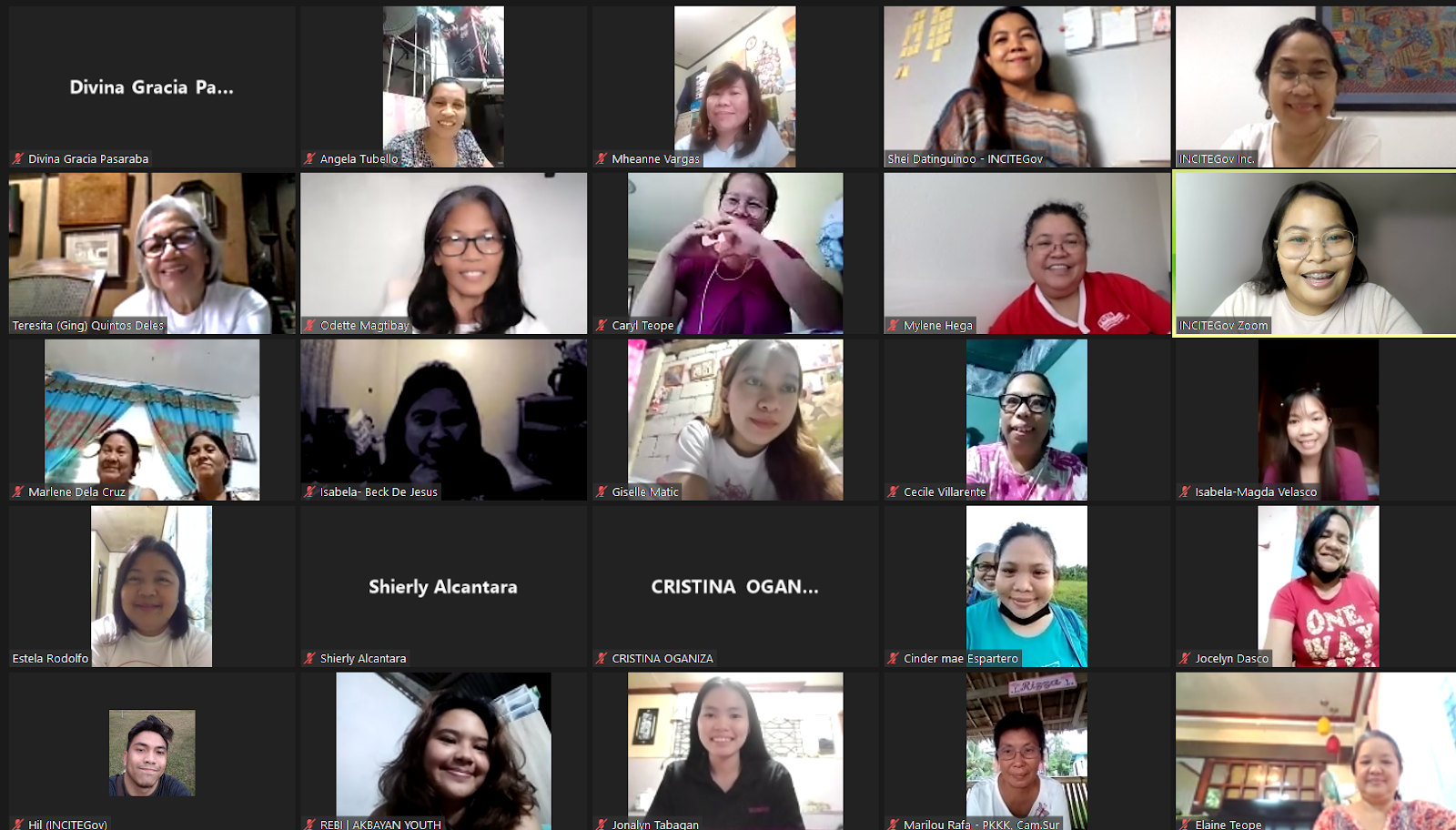 The P-G-D Modules have also been revised and adopted for the voter’s education sessions for Kilos Kabataan Bumoto (KKB). KKB is a project supported by the US Filipinos for Good Governance (US4GG) as an outreach program of the overseas Filipinos led by Imelda Nicolas. As of August, P-G-D-based voters’ education sessions have been conducted with close to 600 participants in 64 communities located in 12 vote-rich areas. 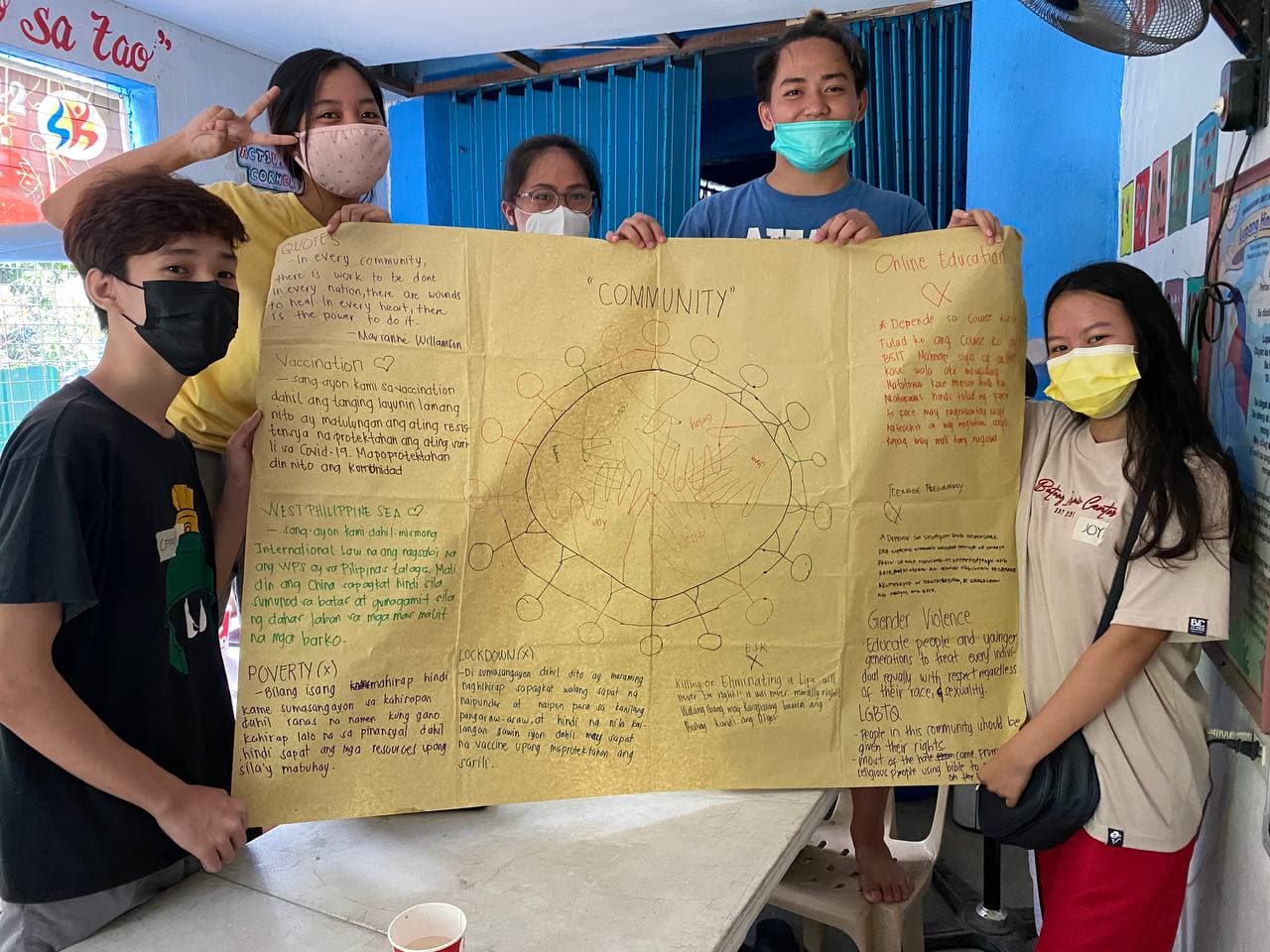 Kilos Kabataan Bumoto participants from Estero, Manila wrote down issues that are important for the youth. The workshop, held on July 14, also included a discussion on the characteristics of a good democratic leader as well as a vision setting of their hopes and dreams for their family and the country.

The upcoming political exercise in 2022 offers INCITEGov an opportunity to support and expand constituencies eager to see that the electoral processes result in the strengthening of democracy – through working through its democratic reform constituencies and partners.

The ongoing sessions on P-G-D modules with the various sectors will be a rich resource for civil society and the academe who would like to seriously look at how we are imparting democratic principles to ordinary Filipinos. ?