A wave of populist regimes has captured some of the world's robust democracies in recent years. From the US and Europe to Asia and South America, democratic backsliding became a trend as populist leaders surged in appeal and won national elections. In the Philippines, Rodrigo Duterte's strongman brand and populist tactics similarly thrived, leaving a trail of polarization that afflicted even the once-united sectors and coalitions of civil society organizations (CSOs).

Against this backdrop, INCITEGov launched two publications virtually on Jan. 28. The first one, "Populism and Philippine Civil Society: Views from Labor, Urban Poor, and Development NGOs," was written by Margarita Lopa-Perez and is an in-depth study on the phenomenon of populism as viewed by specific sectors of civil society. This publication traces the history of civil society engagement with the government and the private sector, identifies the divergent perspectives of CSOs on democratic leadership and governance, and explores why unity seems to be a daunting task for civil society today. 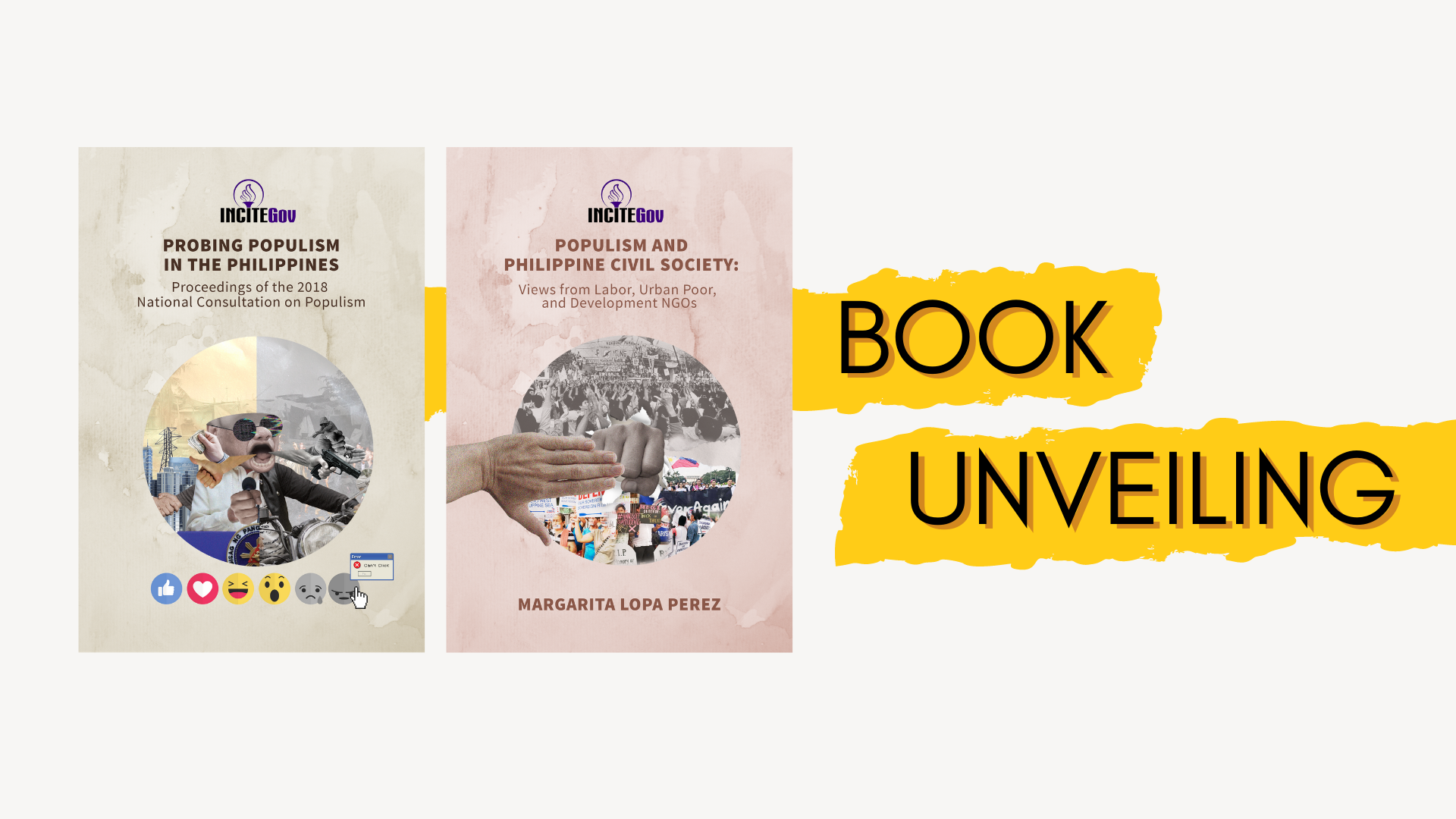 INCITEGov's latest publications on populism in the Philippines

Also launched during the virtual event was a complementary piece, "Probing Populism in the Philippines: Proceedings of the 2018 National Consultation on Populism." It details the discussion of a multi-sectoral forum held on Sept. 13, 2018 where two separate papers on populism - done by INCITEGov and the De La Salle University-Jesse M. Robredo Institute of Governance (DLSU-JRIG) - were presented and validated. INCITEGov and DLSU-JRIG are both members of the Asia Democracy Research Network (ADRN) and the two papers were part of ADRN's 2018 State of Democracy in Asia Report.

Corazon Juliano-Soliman, INCITEGov thematic area lead on populism, said the consultation showed the need to dig deeper into the impact of populism, particularly on the crucial roles that the CSOs have played since the 1960s.

"Marami sa atin dito ay buhay na saksi sa papel ng CSOs sa paghuhulma ng ating demokrasya at kaunlaran [Many of us here bore witness to the role of CSOs in shaping our democracy and development]," she said in her opening remarks. INCITEGov's paper would later form the basis for Lopa-Perez's study on populism and civil society.

What's inside the book

The Populism and Philippine CSO book devoted sections on understanding populism, CSO engagement with the Duterte administration, the growth of a resistance movement, and prescriptions on moving forward.

Lopa-Perez shared that the book examined Duterte's populist brand as manifested in his presentation of himself as a strongman who is one with the masses and not a member of the elite. Duterte also claimed to represent groups previously unheard or underrepresented in the national government, including people from Mindanao and other regions.

"He represented a break from the past and offered the opportunity for change for people who so badly needed and wanted it," Lopa-Perez said.

"From the labor sector to the urban poor, this was because of unfulfilled campaign promises and the loss of opportunity to safeguard concerns of their sectors in government bodies. For development non-government organizations (NGOs), there was a loss of voice in the political arena and loss of foothold as the countervailing force to government," Lopa-Perez explained.

"The best response to a populist - who would seek to sow division and hatred and who has less than the best intentions in seeking positions of leadership - is to recognize and honor the interests of multiple stakeholders in society and promote those interests in the governed by working together moving forward," Lopa Perez said, borrowing from leading theorist on populism, Cas Mudde.

Views from the sectors

The launch also solicited rich and moving reflections from the labor, urban poor, and development NGO leaders who participated in the event as reactors.

He said the term is fraught with debates. It has positive and negative elements but an individual's political stance will ultimately determine their judgment.

SENTRO secretary-general Joshua Mata (lower left) talks about the need to have a grand narrative and a serious grassroots education program.

"For me, this is so personal. Having worked in the labor movement for three decades, I know that the myth of strong leadership has a very, very strong hold in the political psyche of workers," Mata shared.

He rallied everyone on the urgent task of going back to the grand narratives that connect people's everyday problems to society's structural problems.

"Having a grand narrative will make it easier for us to start working together much more closely," Mata argued.

Another urgent task is on democratization and serious grassroots education program, he said."Hindi natin ito nagawa. Kinapos tayo. Mukhang nag-fail tayo sa pagpapalalim ng demokratisasyon [We have not done this. We fell short. It looks like we failed in deepening democratization]," Mata reflected.

As a reactor from the urban poor, Jonjon Elago of the Ugnayang Lakas ng mga Apektadong Pamilya (ULAP) Confederation echoed the same sentiments.

[The poor responds to the feeling of hunger. They are suffering under the current conditions. It may be the right time and opportunity to bring understanding on the cause of their plight and raise consciousness on the real state of the country.]

Jonjon Elago of the ULAP Confederation (lower left) reaches out to non-government organizations to help in educating and organizing grassroots communities.

He also sought help from NGO partners to strengthen organizing on the ground.

The book's release also provided an opportune time for the Caucus of Development NGO Networks (CODE-NGO) to go back to their shared bases for unity, its executive director Deanie Lyn Ocampo shared.

"I understood better that people empowerment and the satisfaction of basic needs are the foundation why we need to influence the way government works for development. These are the reason why we deal constructively and critically with both national and local government," Ocampo said.

[NGOs play a vital role in communicating the actual state of our country's affairs to grassroots communities. Having this understanding will help empower the poor, so we hope our partners can help us strengthen on-the-ground organizing.]

CODE-NGO's executive director Deanie Lyn Ocampo talks about constructive engagement as their approach to push for various advocacies in the national and local levels.

She also reflected on the perceived loss of civil society's voice and shared that CODE-NGO member networks have continued to influence projects and policies on the ground despite the national political context.

Lastly, she stressed the need to concretize and put into action the five prescriptions outlined in the book's concluding chapter. These recommendations are all about developing communities and creating different environments to foster human connections which, Ocampo said, are the "greatest acts of courage and resistance in the face of oppression."

Apart from the reactors, other participants of the online launch also shared their thoughts on the study through virtual meta cards.

The exercise drew themes of going back to the basics of organizing and listening and having deeper conversations to understand the psyche of the people on the ground, particularly those with differing views. Questions on claiming the narrative also surfaced, especially in the face of the administration's tactics to distort democratic values such as human rights and respect for women.

INCITEGov executive director Marj Ibanez also noted the audience's observation of the lack of youth's participation in actions both in the streets and in various fora. Lastly, the participants also sought answers on how civil society and the entire nation can recover from the damages caused by the current administration, especially on the country's institutions and values.

The study underscored the need for civil society to take stock of the gulf created by Duterte's brand of populist leadership.

Soliman noted that the CSOs' inability to have a meaningful conversation on Duterte's leadership and governance had reduced them to their echo chambers.

[We resorted to evading or dismissing conversations on why we differed which may have limited our ability to examine and develop a 'grand narrative' that Joshua has mentioned.]

Soliman then invited the participants to take part in INCITEGov's "Generative Conversations", a follow-up project to the Populism and Philippine CSO study. It is a process of dialogues where participants from different groups discuss their positions on critical issues to understand each other, Soliman explained. It respects differing points of view and aims to bridge the principles and values shared in the past to open the possibility of collaborative action again.

INCITEGov looks forward to having these conversations among CSO leaders who previously had shared advocacies, principles, and values. They had worked and acted together but have since taken divergent positions on leadership and governance issues in the current government, Soliman said.

INCITEGov chairperson Teresita Quintos-Deles also weighed in on the need for such kinds of conversations to move forward.

"Many in 2016 were baffled, many experienced heartaches, and we talked among ourselves. But what's needed is to talk beyond ourselves - to reach out and try to understand so we can move forward. That sort of talking hasn't really happened yet," Deles reflected.

INCITEGov chairperson Teresita Quintos Deles (upper row, rightmost), in her closing remarks, encouraged the participants to continue having similar conversations to build a grand narrative that "consumes our spirit and embraces other people."

Deles added that in her many years in civil society, the exciting moments happen when groups from across all sectors converge to start a new project. Those projects break into old molds or start reversals, she recalled.

The conversations leading to a grand narrative "not born in our minds, not born from talk, but consumes our spirit and embraces other people" should continue, Deles said, especially as the 2022 elections draw near.

"We are in search of that narrative that can lead us to that political moment that we both fear but also want so desperately. All this talking has to bring us to what we will do in 2022 and how we will win 2022," she said.